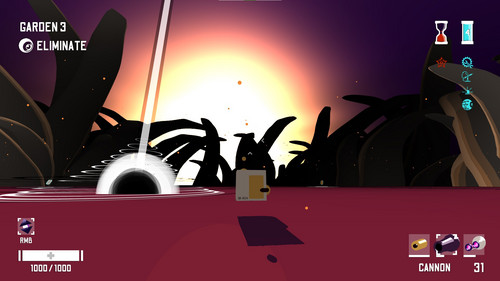 This week’s patch is a big one and starts adding a whole new layer to the game: Boss Fights. Well, a single boss fight.

From now on, after beating all three gardens, the Crystal Fields, the Crimson Desert, and the Carbon Marshes, you will be sent to a nightmarish hellscape where the only way to escape is to defeat the boss. Worried about weapons and ammo? Don’t be, you’ll find everything you need there. But be careful, just because this is a boss fight doesn’t mean time stops passing, wasting too much time there will have the usual consequences.

Bear in mind that boss fights are very much experimental and will very likely be subject to changes as development continues, so please send me as much feedback as you can. The one boss added by this update is called Big Tangerine and all I will tell you for now is that he likes to jump.

As a little bonus, you will also find a new upgrade and a new curse: Rudimentary Thruster and Last Gaze, one makes jumps explode, and the other shoots at you when an enemy dies.

I will most probably keep working on boss fights for the next patch, as well as a couple of minor things I’ve been meaning to do for a while, so with any luck we might have a second boss relatively soon, keep an eye out for updates.

To the patch notes!

After beating all gardens, the player is now sent to a special garden where the only way to escape is to defeat a boss. A boss is a very large enemy with lots of health and dangerous abilities.

After defeating the boss, the Portal appears and the cycle of gardens resumes as usual.