A Shiny and Juicy Portal 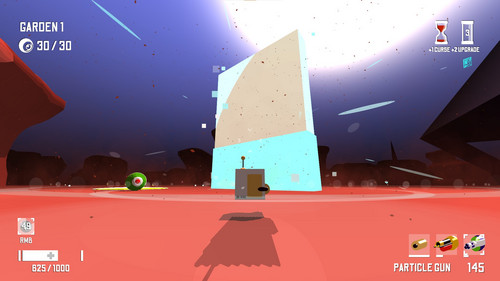 This week was a bit slow and I ended up mostly doing some maintenance on the project as well as some bug fixes, balance changes, and visual improvements. But I do have some cool new content for you.

My favourite of this patch, even if it doesn’t have much effect on the gameplay, is the improved Portal. This element of the game is very old and hasn’t changed much since the earliest Oftalmogarden prototypes, and it’s starting to show. I did improve it somewhat recently by adding particle effects, but it still felt unresponsive and somewhat confusing because it didn’t seem to do anything when you touched it and the “XP distribution” animation was unclear and anticlimactic at best. Players would often think The Portal wasn’t working properly, and it just felt like this big bright rectangle with no hitbox. I think it’ll feel much better now, go check it out and let me know.

As for content, this update brings you a brand new powerful gadget, the Portative Turret. It’s basically a mounted minigun you can place wherever you like, and should help clear a populated area pretty nicely.

The second bit of content is what might be the strongest upgrade yet, Dubious Math. In fact, it’s so powerful that it’s also the first upgrade to have a clear downside! It makes you shoot three projectiles instead of one with any weapon, but doubles your ammo consumption which can put you in tricky situations, but the damage and crowd control potential is absolutely bonkers in my opinion. Have fun with it!

Full patch notes below as always.