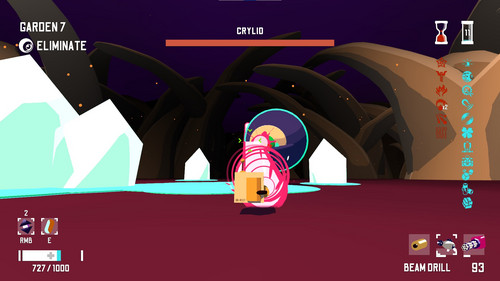 It took a while to come out, but this update should add a fair bit of variety to the game. The biggest addition here is a brand new boss.

So yeah, the new boss is finally here, it’s called Crylid and it cries a lot, leaving puddles of ice cold tears everywhere. It also splits in two after taking some damage, so be careful not to get overwhelmed.

This patch also adds a new weapon called the Beam Drill, which is basically a big dumb laser that pierces through enemies and deals massive damage. It’s a very strong weapon but tends to burn through ammo pretty quickly.

Another addition is the Quantic Phaser, a new gadget that shoots a teleporting grenade! This means that you’ll be teleported wherever the grenade lands, which can be handy to move through a garden quickly, or reach the Portal in time.

This update also includes a bunch of tweaks, fixes, and interface improvements, everything is listed in the patch notes below as always.

While I was working on this patch, the 48th edition of Ludum Dare took place! For those who don’t know about it, Ludum Dare is one of the oldest and most popular game jams, and I chose to participate as a solo dev in the 48h “from scratch” category. The game I made is called Captain Zapdash, check it out: https://nazorus.itch.io/zapdash