The Garden is Open 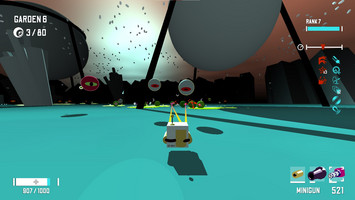 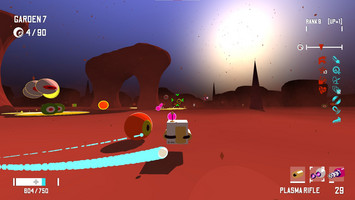 Development of Oftalmogarden has been going on for a while now, close to two years if I am to believe my Git history, though it originated as a side project and a completely different idea at the time. So who knows when the project actually started for what it truly is? Maybe it was today.

Of course, Oftalmogarden is not finished, far from it. I have many plans to improve upon the core concept and add content and features to the game. That being said, I feel that the game is in a state where it's already fun to play and somewhat unique, so why not share it with the world?

So here it is, a demo, for free! Or rather an alpha demo as I like to call it, because it's not a part of a complete yet unfinished product, it's a foundation upon which I want to build a fun, weird, and cathartic experience.

A demo of what though? Oftalmogarden is a chaotic fast-paced third person shooter with, you guessed it, roguelike elements. That means when you die, you die for good, and that randomness is a big part of the game, from level generation to character upgrades. And all this is set on an unapologetically bizarre eyeball-populated planet, because why not?

In its current state, Oftalmogarden promises an arcady, fast, and satisfying yet stressful experience, full of sci-fi weaponry, lasers, explosions, massive waves of enemies (past a certain point), and plenty of upgrades and curses for your character. There isn't an end to the game yet however, your goal will be to clear as many gardens as you can. I got to garden 20 before I hugely buffed XP received in the game, feel free to try and do better!

If what you want is numbers, here is what you will find in Oftalmogarden:

Hopefully that's enough for a few hours or fun.

While I have a relatively clear vision of what the game should be, it's difficult to put into words for now. It's even more difficult to anticipate which parts of this vision are feasible and which ones are actually good ideas. I'm a believer that a game should, for the most part, design itself rather than everything being planned ahead. I'm also not that experienced of a game developer, so there is a fair bit of trial and error going on.

That said, here are a few lines broadly describing the future of Oftalmogarden:

One thing that I can promise is that it'll keep getting weirded, crazier, and more fun.

Now is the time to stop reading and start playing. Have a go at the demo, it's free! And feel free to post some feedback in the comments if you have time, whether you had fun or thought it wasn't all that good.

I am working full time on this game as of this devlog, so expect frequent updates, or at least as frequent as a one-man-team can deliver. If the development of a game is something you're interested in, you may follow me on Itch or any other platform listed in my profile.